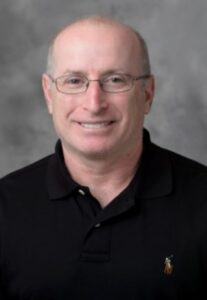 David Goldberg grew up in several different communities, but considers himself from Boston, where he graduated from Cambridge Rindge and Latin School in 1979. He attended Reed College, Portland, OR. and graduated with a B.A. in mathematics in 1984. After 2 years of working as an actuarial administrator, he enrolled in the graduate program at University of Maryland, College Park in 1986. He finished his Ph.D. in 1991 under the direction of Rebecca Herb, and was fortunate to have several other mentors in graduate school, including Paul Sally (U. Chicago), Phil Kutzko (U. Iowa), and Freydoon Shahidi (Purdue U.). He has been at Purdue University, West Lafayette, IN, since 1991, starting as a postdoctoral appointee (Research Assistant Professor), and accepting a tenure track position as an Assistant Professor there in 1994.

He was promoted to Associate Professor in 1997, and Full Professor in 2005. He served as the graduate chair from 2013- 2019. Besides Purdue, he has had visiting appointments at MSRI, University of Iowa, and Boston College, as well as several shorter term visiting appointments. While he has not directed any Ph.D. students, he has mentored several who have studied at Purdue and elsewhere.