History of the Alliance 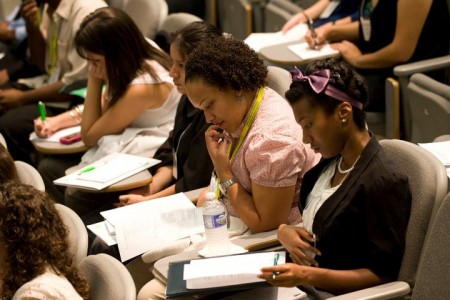 The National Alliance for Doctoral Studies in the Mathematical Sciences, now best known as the Math Alliance was founded in 2001 as a partnership between the math sciences departments at the three Iowa State Regents universities (University of Iowa, Iowa State University and University of Northern Iowa) together with math departments at four Historically Black Colleges and Universities (HBCUs) (Alabama A&M University, Benedict College (South Carolina), Florida A&M University and Jackson State University). Its original name - the Alliance for the Production of African American Ph.D.s in the Mathematical Sciences -- reflected the shared concern of the partners that African Americans were significantly underrepresented at all levels in these fields. Support for the Alliance was applied for and received from the National Science Foundation Division of Mathematical Sciences (NSF/DMS) in 2002. A second grant to support the Alliance was awarded by the NSF/DMS EMSW21-MCTP program in 2005.

From the beginning, the Alliance was organized as a community of mentors and students. The students, who were undergraduates at the four HBCU Alliance partners, were called Alliance Scholars. They each received a stipend and they were invited to the Alliance Summer Research Experience held jointly at the three Iowa Regents universities. Each student had an undergraduate mentor at his or her home institution as well as a graduate mentor at one of the Iowa schools.

The Alliance was one of several initiatives developed by the Department of Mathematics at the University of Iowa as part of its program to increase the representation of US citizens from minority backgrounds in the mathematical sciences. At around the same time, the department formed a tie with the Mathematical and Theoretical Biology Institute/Institute for Strengthening the Understanding of Mathematics and Sciences (MTBI/SUMS) program and its director, Carlos Castillo-Chavez, which resulted in more than 15 students, almost all of them Latino, enrolling in the department's doctoral program (eleven of these students, nine of whom are Latino, went on to obtain their doctoral degree at the University of Iowa). These ties, successful in themselves as vehicles for increasing the number of minority doctoral students in the math sciences at the University of Iowa and the other Iowa Regents universities, also led to ties with other math sciences faculty at minority serving colleges and universities, among them, Joe Omojola at Southern University New Orleans and Bill Jones at Xavier University (New Orleans). When Hurricane Katrina devastated the colleges and universities in New Orleans, the University of Iowa was well placed to act on behalf of the dislocated students.

Ties between departmental faculty at the three Iowa Regents universities and math sciences faculty at institutions that serve a substantial proportion of underrepresented students grew rapidly and it became clear that the Alliance was outgrowing its original structure. More and more students from backgrounds underrepresented in the math sciences nationally were expressing interest in attending graduate school and the Alliance mentors were beginning to build a community with like-minded faculty nationally. In recognition of this evolution, Alliance leadership requested, in 2006, that NSF allow them to change the structure of the Alliance; the name of the Alliance was also changed to the National Alliance for Doctoral Studiesin the Mathematical Sciences to reflect its broadened mission. At the heart of these changes was an expansion of the group of undergraduate mentors to include math sciences faculty at a wide variety of colleges and universities that serve a substantial percentage of students who are underrepresented in these fields. These mentors nominate Alliance Scholars who are then eligible for various Alliance programs, including the annual Field of Dreams Conference.

The original Alliance included both mathematical statistics and applied statistics programs at the Iowa Regents universities. In order to ensure that these areas would continue to play a central role in Alliance activities and programs, the Alliance, in 2008, developed a statistics initiative under the direction of Kathryn Chaloner, at the time Professor and Chair of the Department of Biostatistics at the University of Iowa. With Dr. Chaloner’s untimely death in 2014, leadership for the Statistics Initiative was assumed by Leslie McClure, Professor and Chair of Department of Epidemiology and Biostatistics at Drexel University.