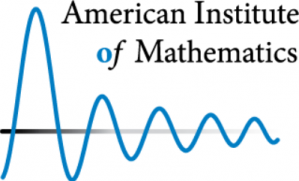 The American Institute of Mathematics, a nonprofit organization, was founded in 1994 by Silicon Valley businessmen John Fry and Steve Sorenson, longtime supporters of mathematical research.

The goals of AIM are to expand the frontiers of mathematical knowledge through focused research projects, through sponsored conferences, and through the development of an on-line mathematics library.

In addition, AIM is interested in helping to preserve the history of mathematics through the acquisition and preservation of rare mathematical books and documents and in making these materials available to scholars of mathematical history.

In 2002 AIM received a grant from the National Science Foundation to create the AIM Research Conference Center (ARCC). ARCC holds weeklong focused workshops in all areas of the mathematical sciences.

AIM is overseen by a board of trustees and an advisory board. Workshops are selected by the Scientific Board. AIM currently resides in temporary facilities in Palo Alto, California. These facilities are the former headquarters of Fry's Electronics and have been generously donated by Fry's. A new facility is being constructed in Morgan Hill, California, approximately 45 miles south of our current location.