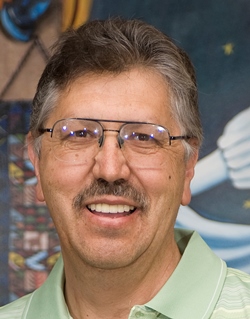 I was born in a rural agricultural community called La Masita in the state of Zacatecas, Mexico, to a Mexican American father, Sr. Jos Bauelos, and a Mexican mother, Sra. Rosalva Bauelos. As a child I had no formal education, workinglike most kids in that region of Mexico at that timeprimarily in farming. We had no running water, no electricity, and no telephone service. In retrospect, life in La Masita was primitive and hard, but I did not know it at the time. My childhood memories are those of a campesino community, whose members were always there to help each other. I received a Bachelors degree from UC Santa Cruz in 1978 and a PhD from UCLA in 1984, both in mathematics. I also received a Masters degree in mathematics education from UC Davis in 1980. After my PhD, I was a postdoctoral fellow in mathematics at the California Institute of Technology (Caltech). In 1986, I received a National Science Foundation (NSF) Postdoctoral Fellowship to go to the University of Illinois at Urbana to continue my research on probability and its applications to analysis with professor Donald Burkholderone of the towering figures on this subject and a tremendously kind and generous person whose mentorship has been invaluable to me for many years. I moved to Purdue University in 1987 as an assistant professor, was promoted to tenured associate professor in 1989, and to full professor in 1992 (five years after my arrival and 8 years after my PhD). At Purdue University I have played many leadership roles, including serving a four-year term as Head of the Department of Mathematics. I have given hundreds of invited lectures at conferences and universities in many countries around the world. My research has been continuously funded by the NSF and in 1989 I received the Presidential Young Investigator Award from the NSF. At Purdue I have supervised nine PhD students and are currently supervising three others. I have been involved in mentoring many graduate and undergraduate students at Purdue and elsewhere not only in the STEM areas, but in other disciplines as well. In 2004 I was very honored to be the second recipient of the Blackwell-Tapia Prize in Mathematical Sciences. Quoting from the prize announcement: ``The Blackwell--Tapia Prize in Mathematics recognizes a mathematical scientist who has contributed and continues to contribute significantly to research in his or her field of expertise, and who has served as a role model for mathematical scientists and students from under-represented minority groups or contributed in other significant ways to addressing the problem of the under-representation of minorities in mathematics. For more information please visit the following websites: http://bio.sacnas.org/biography/Biography.asp?mem=186&type=2 http://www.math.purdue.edu/~banuelos/site/Biographica